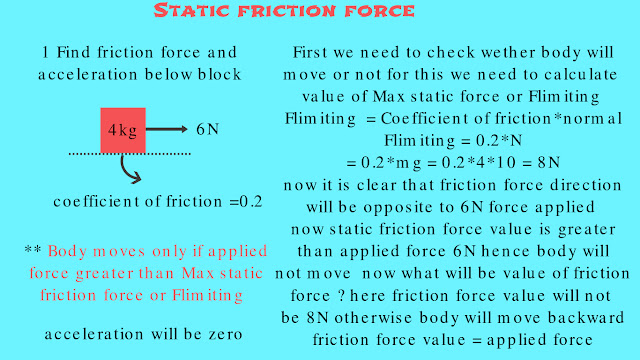 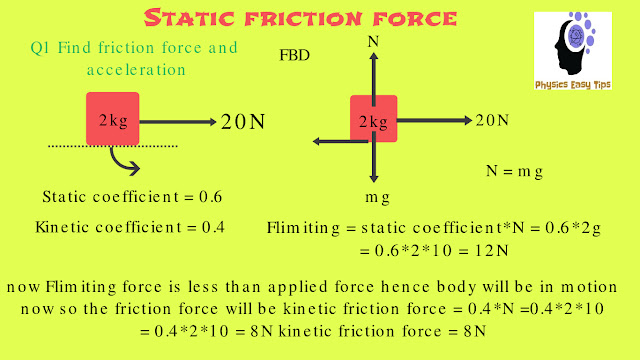 from above question it is clear that body is in motion and friction acting upon body is kinetic friction so we can now find the acceleration using Newton’s law of motion Fnet = ma using this equation  20-8 = ma or 12 = 2a or a = 12/2 = 6m/s². 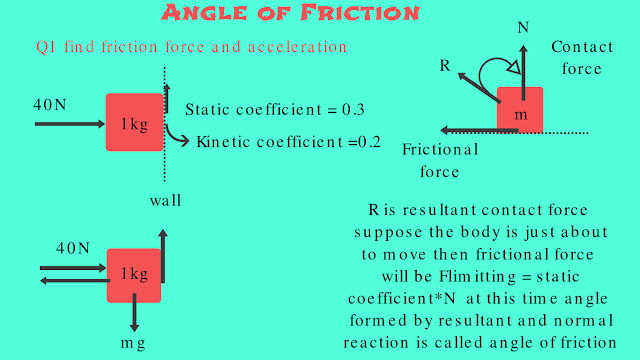 From the above question and FBD mg force try to slid the block on wall so first we will calculate Flimiting force = Static coefficient*Normal   here normal force will be equal to 40N because pushes the wall and wall will push with same force to block as normal force hence Flimiting = 0.3*40 = 12N now here applied force is mg force so mg = 1*10 = 10N now Flimiting is greater than mg force hence block will not slid so block will be at rest hence friction force will be 10N equal to mg force since block is at rest hence acceleration will be zero this is the concept for static friction force.
from the figure angle of friction is define as at the time of Flimiting the angle made between resultant contact force and normal reaction force is called angle of friction and it can be calculated as
tan?  = Flimiting/N  = ?sN/N = ?s , tan?= ?s this is angle of friction you can solve more question based upon the concept learn here now i hope you have enjoyed to learn Static friction force
thanks for reading.
dated 26 Aug 2018
Categories: Physics
Tags: coefficient of frictioncoefficient of static friction formula inclined planefrictional forcekinetic frictionkinetic friction definitionsliding frictiontypes of frictionwhat is friction in science