What is OSI model layers in simple words ?

Whenever we transfer any data like text, picture,video from one computer to the other computer. This OSI Model layers is use. Here nothing is seen, but all the OSI model layers work in the system. So to Know about this is interesting hidden facts.
Therefore lets start to understand OSI model layers, and its working principles in simple way. So that you enjoy to learn this topic.

What is OSI Model Layers ?

Well OSI (open system interconnection) is a reference model. Which is use for communication over a network. This model layers is also called, OSI reference model layers.
So the main purpose of this OSI reference model is, to guide hardware making companies and software developers in one platform. So that digital communication products and software program is inter operate. And provide a clear facility framework.
Which is describing the function of networking or telecommunication system. So that it is able to communicate with each other easily.
Therefore  refer the below OSI model different layers. And i am explaining each layer in details. Its function and working principle.  With best example, so that you can easily understand. So lets start. 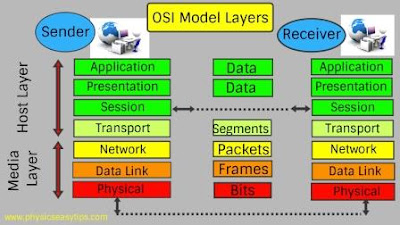 Hence it is possible that, You have study about OSI model layer before. But you are forget this model layer, And this is happen generally, if your concept is not clear about the topic . So in this topic, you are going to learn, OSI model layer so simple.  It is not easy to forget you . Hence I am going to explain  OSI model layers with the help of a story.

Well this is a reference model of seven different layers. This model is not implemented but we have taken OSI model reference to implement TCP/IP.
Hence as i told  this is seven layers.  Then next question arises, that which layers is consider as first layer. So for this, it is depending upon the Sender and Receiver.
If you are on sender side, then your first layer is Application layer. Because you are first touch the application layer.
And If you are on receiver side, then first layer is Physical layer. So that it is receiving information first. Therefore Physical layer is touch first as shown in the above figure.
Hence to remember  OSI reference seven layers model easily.  You can remember this phrase.
” All people seems to need data processing ” .
Now it is easy to understand, OSI reference seven layers model by story. Hence suppose their is a company.  And which is having  seven employee.  Whose details are given below.

Now some more details about all person work responsibilities, just read the story. 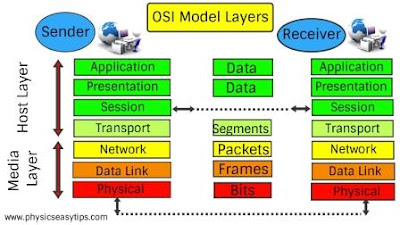 1 Andrew is CEO of the company, He know French language, Now he told Parwez i have 400 pages has to send other company xyz CEO need to deliver by today evening try best to deliver by evening and ensure.
2 Parwez told CEO ok will send and taken 400 pages, Then Parwez saw that all 400 pages are written in French language, But the other company xyz CEO is Indian and know English language only, Then Parwez translated this pages into English language, And now handed over 400 pages to Suresh and told this is important document need to deliver today urgent make sure no any mistake otherwise we will lost our job it is instruction of boss CEO.
3 Suresh  Now Suresh taken 400 pages and seen, where to go this document ok coming from Delhi and to go Mumbai. Now Suresh first called other company xyz same level Employee and asked today your company is open, Other company Employee told yes open, Then Suresh told ok i am sending some document to you after received, Please call me to inform, You have got the document ( In figure you can see dotted line shown ), Then other company xyz Employee says ok will inform you no problem.Then Suresh handed over document to Tanveer.
4 Tanveer  Received 400 pages and think that 400 pages are very important if i will send in a single bundle and by any means if bundle is lost then all document will lost this is danger, So he make four bundle of 100 pages each and given number 1,2,3,4 serially, And thought if by any means one bundle is lost, At least 3 bundle will deliver. Now handed over to Naveen.
5 Naveen Received 4 bundle and attached address From and To on each bundle and suggested  to driver the free route short distance to go fast and deliver timely, and finally handed over to Dinesh.
6 Dinesh  Received 4 bundle and checked all envelop are good address is also there, But envelop is open anyone can read this confidential document. Then Suresh fixed all four bundle with feviquick and sealed the enveloped with confidential documents round sealed such that if anyone try to open the document it will be recognize someone has open document and handed over to Pawan as saying that Naveen has informed you through  which route you have to go, you will follow that route and deliver this document fast.
7 Pawan  Received document and carrying this document and reaches to same level employee in other company xyz and handed over document.
Other company next level employee received and checked that document ok it is sealed means data is ok. Now this employee handed to next level now this checked four bundle and combined together and handed over to next level.
Now next level employee received document and called to Suresh hi i have received your document now you not need to take tension, Then Suresh OK thank you now dotted line connection is break. Now document is delivered either other company xyz CEO read the document or not read the document, But data has been delivered work completed.

Application Layer
All software and app work, gmail, yahoo, facebook work on Application layer, its work is to provide user interface like when you open word, excel, note pad with the help of MS word, Hence user work at Application layer.
Presentation Layer
Encryption and decryption for example take two files Physics.mp3, Physics.doc, Physics.jpge, Now i ask you when we will open the Physics.mp3 it will open in vlc media where as when we open physics.doc it will open in ms word . So it is work of Presentation layer to how data will be represented.
Session layer
This is called end to end layer unless data is not delivered it will be in touch with receiver session layer. If data is lost it will display message data is not sent for example.
When you send mail and if mail is not delivered the you get a message mail is failed and if mail is delivered then you get message mail is sent .
Hence session layer work end to end this is work of session layer.
Transport Layer
Segmentation is done by transport layer. here it is also important at this layer two protocol work TCP/UDP .
TCP is transmission control protocol and UDP is user data protocol.
Network Layer
Routers work on this layers, find the route to deliver data work on IP addresses, Route is decided at this layer through which route data will be sent.
Data Link layer
Added error detection and correction capability and also flow control work done by data link layer.
Physical Layer
At Physical layer data is converted into bits binary and transmitted through medium wire copper , fiber or wireless and data delivered at receiver end.
Top three layers Application, Presentation, Session work on software where as bottom three layers Physical, Data link , Network work on hardware.
And most important Transport combine these two software and hardware together.
Now we will continue next topic in next post .I hope you have enjoyed learning OSI Model Layers Explanation by story. If you like comment and share, Thanks for reading and sharing, keep reading more and more.
Dated 28th Oct 2018
Categories: Telecommunication

Having read this I thought it was very informative. I appreciate you finding the time and energy to put this short article together. I once again find myself spending way too much time both reading and posting comments. But so what, it was still worthwhile!|

Free Internet Speed Test For Your Phone And Desktop Online

Today i’m going to show you,  how you can do free internet speed test for your phone and desktop online  Because most of the time you face internet speed challenges with your service provider. But Read more…