Newton’s law of motion and law of inertia

Newton’s law of motion and law of inertia

Newtons’s law of motion and law of inertia state about the cause of motion the main point of discussion of this topic is why and how a body moves or changes its position and its physical state Newton found the reason of the motion and physical state changes is due to Force hence depth analysis about force in this topic hence Newton given three laws of motion based upon the force analysis refer for different types of forces .

This is branch of Mechanics in which there are two parts one is kinematics and other is dynamics in kinematics we study about distance, displacement, velocity,speed,acceleration which we have already studies you can refer Kinematics  in this topic we have to study about dynamics means cause of motion means if an object is moving with constant velocity why ? if an object moving with constant acceleration why ? if an object is at rest why ? all the reason or cause we will study in dynamics and Newton’s laws of motion to understand Newton’s laws of motion it is very important to understand  “force”  in day to day life we listen force word so first try to understand force so lets talk about force.
force is a push or a pull example on a office door you can apply a push or pull force next point living or non-living things can apply force most of the time students confused only living things can apply force wrong non-living air can apply force on tree or anythings you feel when force acts two objects are involved one object force apply and other object force receive example when you push the door then you are applying force and door receive the force we also know force is a vector quantity and its point of application is also important now we will discuss Newton’s laws of motion.
Newton’s laws of motion:
1st Law (Laws of inertia) it state that if a body is at rest or moving it will continue in its same state unless any external force is not applied only external force can change its initial physical state this is also called laws of inertia if net force on a body is zero acceleration of body will be zero change in velocity is zero or velocity is constant means magnitude and direction is constant 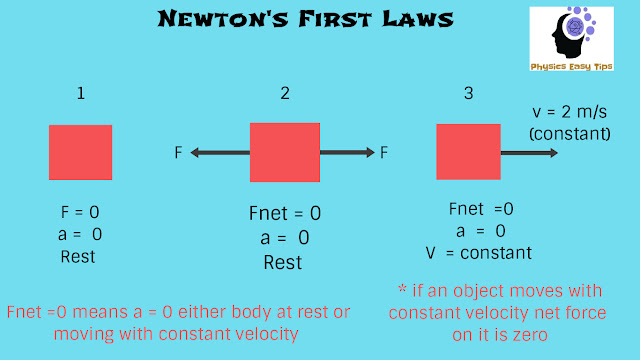 From above three picture state clearly Newton’s first laws of motion state if velocity is not constant then acceleration is there and hence net force will not be zero if net force is zero it does not mean that velocity is zero velocity will be constant and body will be in motion.

2nd Laws : rate of change of momentum is equal to the force applied on the body by external agent that is ∆p/∆t = (p₂-p₁)/(t₂-t₁) now for very very small time we write dp/dt =d(mv)/dt  now differentiate with respect to time dp/dt = mdv/dt +vdm/dt here mass is taken as constant for this laws so dm/dt = 0 hence equation becomes dp/dt = mdv/dt = ma 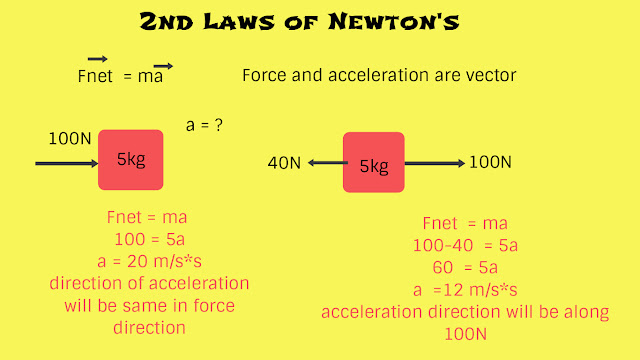 Newton’s third law : if we apply force on a body then that body also apply same force in opposite direction. 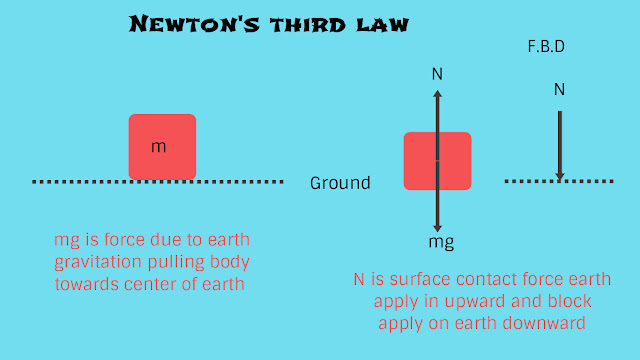 See the picture above block is on ground  apply a normal contact force on earth N and earth also apply same normal reaction force on block N contact force has two important point first its always acts normal to contact surface and second its direction compress the object this is important point for contact forces.
Newton’s third law of motion is action reaction pair of forces every action has reaction this is law of nature both the forces action and reaction nature should be same. 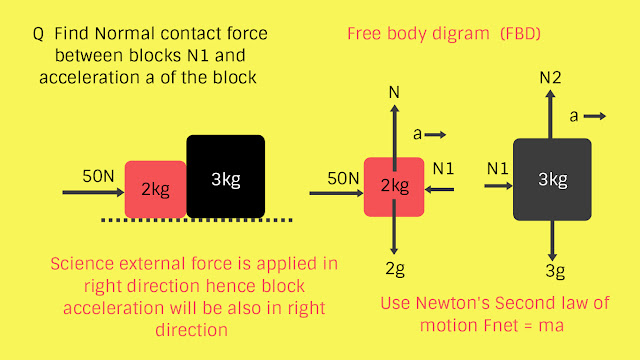