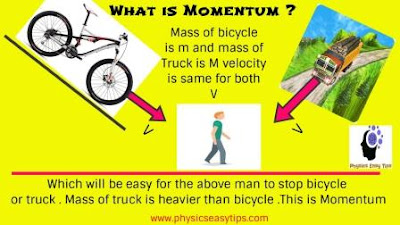 Conservation of momentum
As from the above figure momentum. Bicycle and truck are moving towards you as shown  then which one you will try to stop.
I am sure you will try to stop bicycle not truck.But why the reasoning behind this is momentum. The momentum of truck is more than bicycle.
Momentum is simply mean mass in motion. Momentum of truck is more because it is very massive. Now momentum of bicycle is less because it has less mass. But it does not mean that momentum only depend upon mass. It depend upon velocity also.
Hence momentum mathematical relationship with mass and velocity is define as  momentum = mass*velocity or denoted p = mv.
Where p is momentum m is mass in kg and v is velocity.
You should remember that velocity is define as speed with direction, If an object has large speed it also has large velocity. we know velocity is vector quantity so momentum is a vector quantity.
From the above momentum equation  p = mv we see that if you vary the mass and velocity momentum will change.
If you increase either of variable mass or velocity momentum will go up. So truck momentum is more than bicycle. This also means that an object at rest does not have momentum. Velocity of an object at rest is zero so no movement.
So in order to an object having momentum it must be moving. I hope you have understand momentum.
Now let me discuss more interesting about momentum, An important point to note about momentum. It is a vector quantity this means that it has magnitude as well as direction.
The direction of momentum is same as the direction of velocity vector. But in order to fully describe the momentum of an object must include direction.
Now look at some  example of momentum for better understanding. An object of any size can have large momentum whether its size is large or small but can have large momentum.
Because its depends upon the speed of an object as well its mass.
If its speed is more then its momentum is more and if its mass is large its momentum is large. Now you think that all object which have greater mass have greater momentum but it is not true for all cases .
Let us discuss in this case a super tanker ship is coming to the port not be travelling very fast through the water but it is massive so it will be easy to stop at port safely.
Lets understand momentum with daily life example . A truck of full load has a large mass and must slow down long before a stop light because even with a small velocity, It has a large momentum and is difficult to stop.
A bullet, although small in mass, has a large momentum because of an extremely large velocity.

What is Conservation of momentum ?

As we have seen mathematical relation of momentum p = mv now differentiate this equation on both side with respect to time then will get.
dp/dt  = mdv/dt  here mass is taken as constant, Now we know that dv/dt is acceleration but remember which acceleration this is centre of mass acceleration if you are not digesting refer previous centre of mass post.
Hence we can write dp/dt  = ma and from Newton’s second law ma is Fnet or we can write
dp/dt  = Fnet  now try to understand physical meaning of this equation.
Rate of change of momentum is net force on the system. Its physical meaning is if force is applied on a body then its momentum will be greater in the force applied direction. 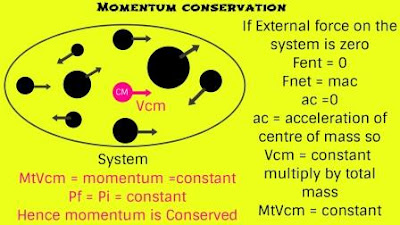 See the Above picture for conservation of momentum suppose we have a system as shown in which there are some objects which are moving as shown in figure.

What is the formula for the law of conservation of momentum? 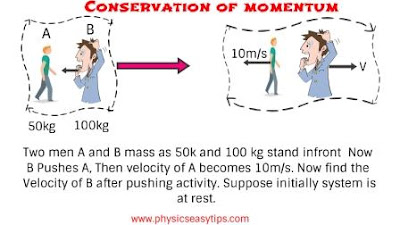 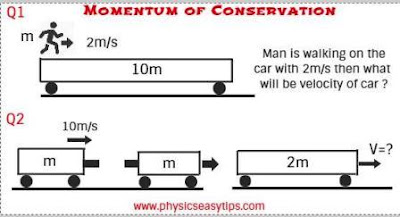