As we have discussed here body mass will be continuous distribution over a shape and length, not in discrete manner. So we required here concept of Integration meaning.
So that you can well understand without any doubt.
Hence first see the Integration meaning, Then will continue for center of mass formula derivation.
calculus is the important branch of mathematics, greatest invention for mankind  and invented by Issac Newton .when he was stuck at a point where normal mathematics was not supporting to carry out his experiment and derivation after rigorous hard work for two years, Newton finally invented Calculus and you know without knowledge of mathematics we can’t understand physics well . mathematics is tool of physics or backbone of physics so we need to understand calculus application here .calculus is amazing branch of mathematics simple and complex both, but we are studying here physics so we will not study here in depth as per our need we will see application.
Now come to the Integration meaning. You generally see two symbol is frequently use in Physics and mathematics one Delta(∆) and other is d. Now see the meaning of both.


∆→ Meaning change for large number, When written as ∆x means change in x, but its value will be large.

d→ meaning change for very very small, When written as dx means change in x, but its value is very very small.
Here this concept will be use to calculate center of mass formula. In this topic you will learn how to take very small value to calculate mass of uniform distributed body. Apart from here this concept will be use in rotation mechanics also and everywhere in Physics as well as in mathematics.

So this concept is very important,Hence lets start. 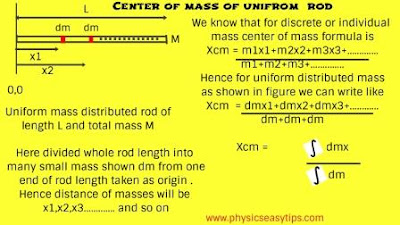 Here the center of mass formula derive Xcm = ∫xdm/∫dm is for continuous mass distribution.Hence if continuous mass distributed then you can not apply individual or discrete center of mass formula Xcm = (m1x1+m2x2+m3x3+………..)/(m1+m2+m3…….).
Similarly Ycm  = ∫ydm/∫dm  or for z axis  Zcm  = ∫zdm/∫dm .
Now one important point what is meaning of ∫dm, This is sum of all small masses and it will be equal to total mass. So we can write ∫dm = M
Xcm = ∫xdm/M.
Now problem here in this above equation ∫xdm/M is that there are two variable x and dm of different type one is length and other is small mass so it can’t not be integrated unless you not convert into same type.
Hence to do integration above equation we have to change one type of variable,So we will have to change dm value in the form of x to do this one new term is introduce see below. 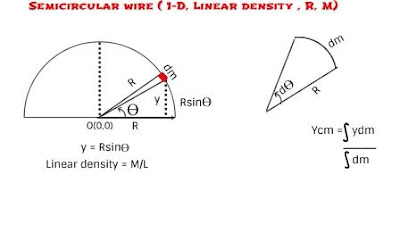