3 Equation of Motion in Physics

What are the 3 equation of motion? 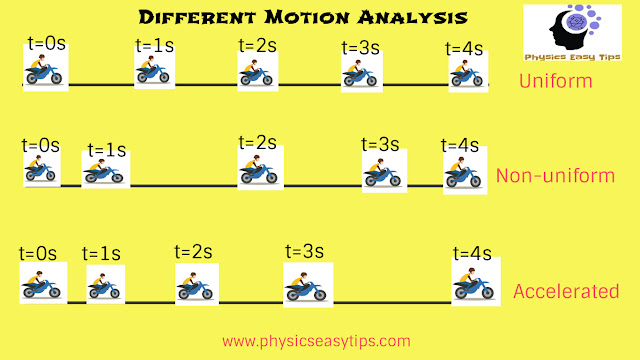 Student always confused in kinematics problem because they not focus on concept of kinematics they only remember 3 equation of motion and think that kinematics is finished but when question of kinematics is asked then fail to solve the problem generally because concept is not clear so i recommend you first learn basic concept of and parameter involved in kinematics for basic concept and parameter refer this post first kinematics concept .
kinematics topic is conceptual we actually analyse motion of body or particle in kinematics suppose a car was running on road at a certain time driver seen a breaker on the road and applied break on the car then what will happen after some time car will stop then we analyse motion about this parameter. what was initial speed of car before applying break, how much distance covered by car, how much time taken to cover this distance,how speed of car was increasing with time hence only four parameter relation involved in kinematics motion equation that is s,v,t,a.
s→ distance or displacement
v→ initial, final speed, velocity
t→ time taken to complete journey.
a→ acceleration or retardation
hence using this parameter 3 equation of motion for kinematics is derive relation between them but don’t think only this equation of motion is kinematics this is only a little part of kinematics as mentioned above we have already studied basic kinematics concept now we will see some conceptual problem lets start and understand concept for kinematics.
Q1 equation of motion is given x = 2t² find the speed at 2s and find average speed at 2s.
Ans this equation relation is between distance and time now from basic kinematics concept and parameter we know that dx/dt =v if you have not study differentiation refer  differentiation post  .
from equation x = 2t² when we put t =0 then x = 0 its mean that particle start motion from origin now we know that instantaneous speed and velocity is same in magnitude only difference is velocity has direction so for speed at 2s is instantaneous speed and we know that how to calculate instantaneous speed that is  v = dx/dt so
differentiate the given equation x = 2t² dx/dt  = 2*2t that is v = 4t
hence if we put t = 0 then speed is zero its mean that at t=0 particle is at rest but according to question speed at 2s hence put t=2 in equation v =4t = 4*2  = 8 hence speed at 2s is 8m/s.
now for second query average speed we know that average speed is total distance/total time now again put t= 0 then x =0 put t=2 then x = 2*2²   = 8 hence average speed = 8/2 = 4m/s . you can see in this question speed is variable every time speed increasing this is case of accelerated motion in our above picture.
Q2 equation given x = 4t – t² find distance traveled by particle in 3s
Ans think how we take step to solve this type of problem.
first put t=0 then x=0 its mean that particle start from origin now differentiate to find speed dx/dt =v  dx/dt  = 4d(t)/dt – d(t²)/dt = 4-2t hence v = 4-2t now put t =0 then speed v = 4m/s initial speed
here you can analyse speed is decreasing with time
now find when speed will be zero put v =0 then  4-2t  =0 so
t = 4/2  = 2s now find the distance travel at 2s
x  = 4*2 – 2²  = 8 – 4  = 4m  hence at 2s velocity of particle is zero and will return back but has traveled 4m distance now put t = 3s then particle position x = 4*3 – 3²  = 12  – 9 = 3 so at this time particle position is at 3m hence 1m has returned back so total distance will be 2s distance 4m and 3s distance 1m back so total distance  = 4+1 = 5m concept is don’t put directly t =3s in equation it will give you displacement but question asked for distance so for distance first check particle round back.

t=4s                  t=3s                   t=2s                t =1s
here it is clear that every second velocity is increasing with 10m/s
so in every time interval velocity increment is same and acceleration is uniform constant and equal to 10m/s²
now we know that instantaneous acceleration is define as
dv/dt  = a now from here we can write taking integration on both
v         t
side  ∫dv  = ∫adt  after simplification  v – u  = at or we can write as        u        0     v  = u + at  this is first kinematics equation where u is initial velocity v is final velocity and a is uniform acceleration and t is time now for second equation we know that instantaneous velocity is written as ds/dt so from first equation we can write as
ds/dt  =   u + at now integrate on both side
s        t          t
∫ds  = ∫udt + ∫atdt  now after integration on both side we will get
0       0         0
s  = ut +1/2at² this is second equation of kinematics where s is displacement not distance note it u is initial velocity a is uniform acceleration and t is time
now for third kinematics equation square on both side first equation as  v²  = ( u + at )² simplify this equation then we will get
v²   = u² + a²t² + 2uat  v² – u²  = 2a(ut +1/2at²)  = 2as hence
v² – u²  = 2as  putting value (ut +1/2at²)  as s hence this is third equation of kinematics.
now we will see how this kinematics equation of motion is apply in case of free falling body as we know that when we through a ball vertically upward then it goes up in a straight line path with decreasing velocity and at maximum height its velocity becomes zero and then that ball start falling down on the same straight line now every time its velocity is increasing with constant value of g during free fall hence this is case of uniform acceleration motion so we can apply all 3 equation of motion here.
upward case :
when we through ball vertically upward in this case velocity and acceleration due to gravity is in opposite direction then here a = -g
then our equation will be .
v  = u – gt
h  = ut – 1/2gt²
v²  = u² – 2gh .
free fall downward :
in this case velocity is increasing every second and direction of velocity and acceleration due to gravity is in same direction the equation will be like this.
v  = u + gt
h  = ut + 1/2gt²
v²  = u² + 2gh
one more equation is there distance travel in nth second for this distance calculation we use above displacement equation as
S?th  = S? – S?-₁ putting value of n and n-₁ in place of t in equation s = ut + 1/2at² then we get equation S? = u +a/2(2n-1) so using this equation we can solve numerical problems.
Q6 A body is thrown vertically upward with velocity u find time taken to reach maximum height, maximum height, time taken to reach on initial point.
Ans this is simple question here initial velocity given u and is positive at maximum height final velocity will be zero a = -g now apply equation  v = u – gt put v = 0 then t = u/g this is time taken for maximum height now for maximum height use formula
v²  = u²  – 2gh here v = 0 so h = u²/2g which is maximum height now for time taken to reach at initial point concept when body will reach its initial point its mean that displacement will be zero then apply equation s  = ut – 1/2gt² now displacement is zero hence put s =0 then ut – 1/2gt² = 0 now from here t =0 or t = 2u/g here t = 2u/g is time taken to reach on ground.
Q7 A stone is dropped from a tower height 20m find time taken to reach on ground and find speed just before hitting ground.
Ans simple basic question here stone is dropped means initial velocity u =0 here h = -20 and a = -g then apply equation  s  = ut – 1/2gt² now put u =0 then h = 1/2gt² now from here t  = √2h/g now put value of h = 20m and g = 10 we will get √4 hence t = 2s.
now for final velocity v  = u -gt  = 0 -10*2  = -20 hence speed will be 20m/s.
now you can practice more problem like that i hope that you have got the concept involved in this topic and enjoyed learning kinematics for 3 equation of motion we will continue in next post thanks for reading.
dated 24th Jun 2018